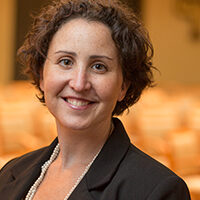 Rabbi Rachael Bregman is thrilled and humbled to take her place in the long line of distinguished leaders who have served this warm, dynamic, creative, and caring community. She serves those who seek out Jewish Wisdom to ameliorate the challenges life throws our way daily.

Rabbi Bregman is the first woman to serve this community as rabbi and the first resident rabbi in more than 50 years. She grew up in the suburbs of Boston as part of a wonderful family with her parents, Adeane and Larry, and her brother, Josh, who is now married to Rebecca with three children—Sam, Alexis, and Jack—as well as an extraordinary Jewish community at Congregation Beth El of the Sudbury River Valley with Rabbi Lawrence Kushner. She was actively involved in NFTY, the Reform Movement’s youth group, and spent most of her summers at Camp Ramah in New England, a Conservative Movement summer camp.

She earned a bachelor’s degree in Human Development and Psychology from Boston College, with a double minor in Jewish Studies and Studio Art. Boston College is a Catholic school, so Rabbi Bregman sought out connection to Jewish community by working as a youth group advisor throughout her college years. Upon graduating from Boston College, she took on full-time employment as a youth educator, a powerful step in her rabbinic journey. She also took time out to hike the Appalachian Trail, which brought her to Georgia for the first time but certainly not the last.

She loved the work but felt she needed to learn more to master the task of shaping and nurturing Jewish souls. It was at this time that Rabbi Bregman formally approached Rabbinic school. She first earned a master’s degree in Human Development from Harvard University’s Graduate School of Education, then continued on to Hebrew Union College – Jewish Institute of Religion (HUC-JIR) to work towards smicha, or ordination. She spent her first year of school in Jerusalem and stayed for a second year to study Talmud and Mishna at Pardes Institute of Jewish Studies, a liberal Orthodox yeshiva. 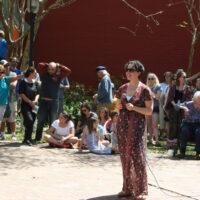 Upon returning to the U.S., Rabbi Bregman completed her studies at HUC-JIR’s New York campus. During her four years in New York City, she ran the Soup Kitchen at HUC; served as the student rabbi at the Manhattan Hebrew Association for the Deaf and Brooklyn Heights Synagogue; worked as a chaplain for both Memorial Sloan Kettering Cancer Center and Mount Sinai Hospital; became a student chaplain in the U.S. Navy and a pastry chef at Mara’s Homemade Restaurant.

She learned everything she could both inside the classroom and out, becoming a fellow with Rabbis Without Borders, a subsidiary of National Center for Leadership and Learning (CLAL), and a speaking fellow for American Jewish World Service. In search of true justice, she had many adventures traveling the world to places like Rwanda, Uganda, and even St. Paul, Minnesota.

Upon ordination in 2010, Rabbi Bregman took a position with The Temple in Atlanta, returning to Georgia, where she found a home. There, she served for three years as the rabbi for Open Jewish Project, a grant-funded endeavor under the umbrella of Synagogue 3000 and NextDor. The participants under Rabbi Bregman’s leadership strove to enrich and invigorate young, Jewish Atlanta. Through this work, she connected approximately 3,000 young adults a little more firmly to their Judaism. She also worked diligently towards educating the Atlanta Jewish community about the human rights infraction of our day: human trafficking.

She now serves on the boards of Truah (formerly Rabbis for Human Rights), The Jewish Community Relations Council, and is a founding member of Tzedek Georgia. She was accepted into the first cohort of CLAL’s Clergy Leadership Incubator and continues to speak regularly against human trafficking. In addition to her congregational work, Rabbi Bregman continues to build community and focus on Jewish engagement in Brunswick, Atlanta, and beyond.